For some time now, the focus has been on reducing the weight of personal protective equipment. Until now, the X-ray apron has protected the front of the body from the neck down to the knees with a uniform lead equivalent.

The latest scientific studies show that approximately 80% of the effective dose for the examiner is in the area from the chest to below the gonads because the organs that are particularly sensitive to radiation, such as the intestine, stomach, bladder, gonads, lungs and large parts of the active bone marrow, are located there.

The effective dose can be effectively reduced if the radiation protective material is concentrated in the chosen area.

MAVIG was the first manufacturer of radiation protective clothing (PPE) to develop an approved and certified apron collection that implements this concept – the new Levio Edition.

In this case, the specialist literature recognises a considerable risk of orthopaedic damage in long-term users of radiation. However, personal protective equipment should not lead to irreversible physical impairments, even when worn for long periods! Ultimately, there has been a lack of concepts and possibilities for significantly reducing the weight of protective equipment and providing substantial physical relief for people who are occupationally exposed to radiation.
Recent findings [4] – [6] now describe the need to rethink radiation protection.

The rule, still valid today, is that only the lead equivalent value is used to evaluate the protective effect of X-ray protective clothing, is viewed critically in the latest research. Instead, the actual distribution of the dose in the body and the radiation sensitivity of the primarily-exposed organs are used. Consistent application of this concept, supported by computer simulations, leads to protective clothing with the same protection at lower weight or more protection at the same weight.

MAVIG was the first manufacturer to successfully implement these new findings with the Levio® concept.

Due to the health-related function of X-ray protective clothing, it is subject to legal regulations that govern shielding properties and design throughout Europe and at national level.

These include first and foremost:

The current standards assume an even distribution of material on the body based on the lead equivalent value and leave no room for application-specific criteria. However, the lead equivalent value is a purely material parameter and not a direct measure of health protection.
Thus, large parts of the body (from the neck to the knees) are covered with a uniform lead equivalent, without taking into account the examination-specific dose distributions on the one hand and the different radiation sensitivities of the organs on the other. This blanket standardisation in the structure of protective clothing leads to an unnecessarily high weight load.

The last time it was possible to significantly reduce the weight of X-ray protective clothing was two decades ago with the introduction of lead-reduced protective materials. Since then, convergence of the characteristics “high protective effect” and “low weight” has not been possible.
The graph below illustrates this relationship. For this purpose, MAVIG had the lead equivalent value determined for various lead-free and lead-containing (solid lead and lead composites) protective materials and plotted this against the weight per unit area.

It is currently known that the correlation between lead equivalent value and weight per unit area does not permit any further reduction in the weight of the protective materials (see Chapter 1). Consequently, new approaches must be found. In their current studies [4] – [6], the authors Dr Heinrich Eder and Dr Helmut Schlattl present completely new approaches for substantially optimising the weight of X-ray protective clothing while maintaining or increasing protection.

It is no longer just the lead equivalent that is considered
but the protection factor of a radiation
protective apron based on the effective dose.

The effective dose is a weighted whole-body dose measurement that takes into account the different radiation sensitivities of organs and tissues and thus best represents possible long-term damage such as radiation cancer and leukaemia. That is why the effective dose is anchored in the Radiation Protection Act (Germany) as the basis for determining body doses and limits.

The radiobiological (effective dose-based) protection factor is calculated using a digitised phantom. The International Commission on Radiological Protection (ICRP) has thus created a female and a male high-resolution digital reference phantom of the human body, including all organs and tissues. It is the basis for calculating body doses.

In the publications [4] – [6], various Monte Carlo simulations were carried out on typical workplace situations (patient lying down, examiner looking at the monitor, etc.) with the aid of the aforementioned anthropomorphic ICRP reference model and extensive personal dose measurements carried out at interventional workplaces.

It was shown that approx. 80% of the examiner’s effective dose occurs in the area from the chest to below the gonads because this is where the organs that are particularly sensitive to radiation, such as the colon, stomach, urinary bladder, gonads and large parts of the active bone marrow are located.

MAVIG is the first manufacturer of radiation protective clothing (PPE) to develop a regulatory-approved and certified apron collection that implements the presented concept – the Levio Edition.

The protective clothing of the Levio Edition has additional shielding for the most radiation-sensitive organs from the chest to the gonads resulting in especially strong dose reduction in those areas. The protective material is applied where it is most effective.

Special Structure of the Levio® Edition

In order to achieve the greatest possible weight reduction, we manufacture the Levio panel specifically tailored to the individual according to the respective body measurements. In this way, we produce individually suitable X-ray protective clothing for each user of radiation.

The concept presented and the resulting development of X-ray protective clothing can be implemented on a user specific basis for selected MAVIG models.

Instructions for Dimensioning the Levio® Panel

Measure at the neck from the shoulder (where the inner end of the shoulder seam will be later) to the start of the chest. Anatomically speaking, the chest begins at the second rib. This should be approximately midway between the collarbone and the nipples.

Measure at the neck from the shoulder (where the inner end of the shoulder seam will be later) or from the waist in the case of a skirt to below the gonads. In most cases, these should be covered if you measure to about 10 cm below the crotch. This is highlighted in colour on the inside of the protective clothing in order to visualise the reinforced area at any time.

Of course, we have had the Levio Edition certified by an external notified body in accordance to all applicable standards.
All models received the well-known CE 0302 certification and fulfil all regulatory requirements.
Naturally it still applies, independently of the concept presented, that as much protection as possible should be provided by on-site radiation protection. This primarily includes lower body protection mounted on the table as well as ceiling-mounted radiation shields. If the specific intervention permits, radiation protection drapes positioned on the patient should also be used.

In their publications [4] – [6], the two authors Dr Heinrich Eder and Dr Helmut Schlattl even go one step further and call for a change of the current regulations. According to their research, it would be possible to shorten the protective clothing altogether. This measure could of course save a considerable amount of weight.

According to the authors’ calculations, the full implementation of the concept could even achieve a weight reduction of up to 40% compared to a current protective apron under the usual examination-specific conditions with a protection factor of 50. At the time of writing though, this would not be compliant to the
current standard IEC 61331-3:2014 /DIN EN 61331-3:2016.

However, perhaps it will be an impetus for rethinking. 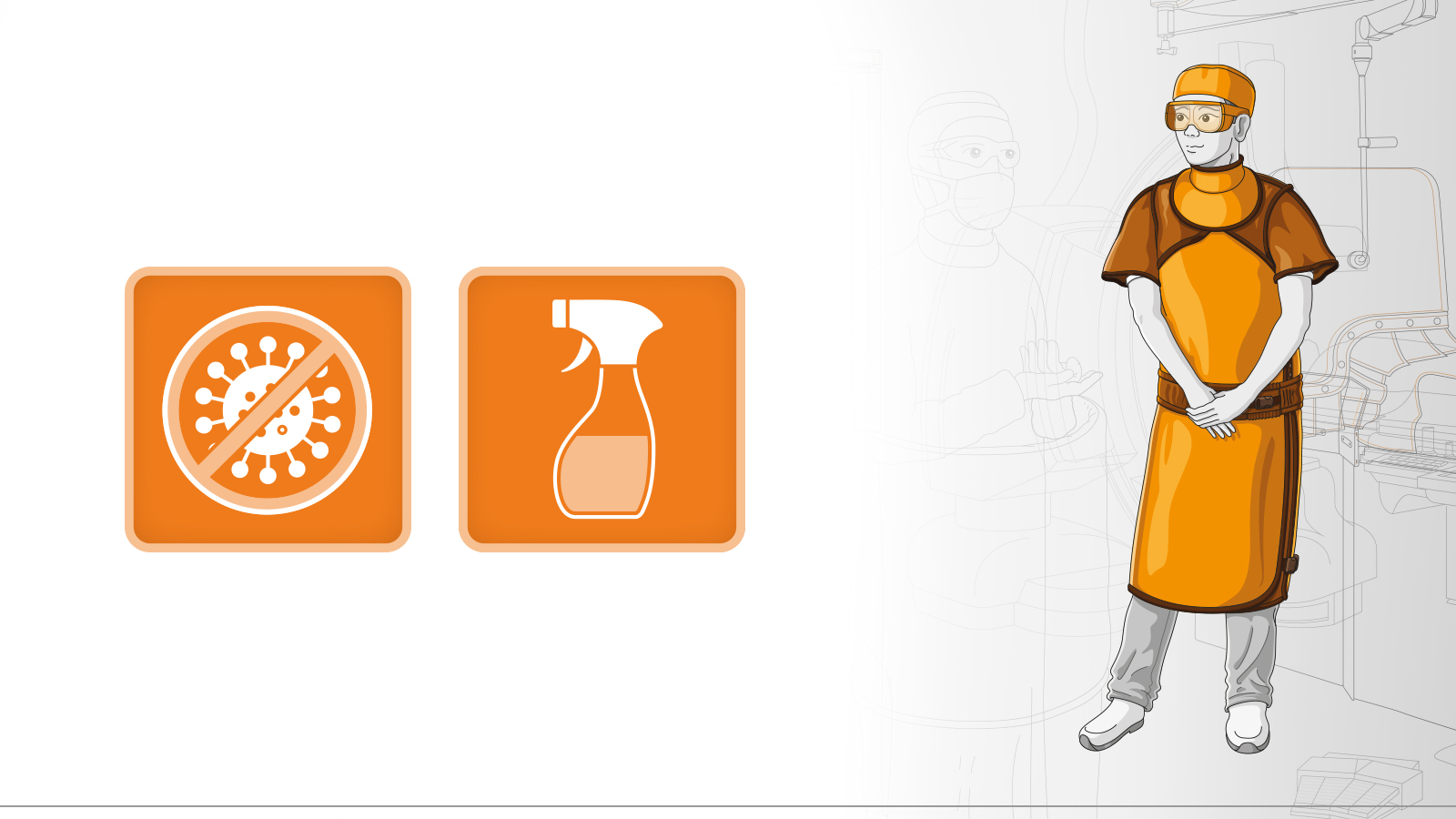 Cleaning and Maintenance of X-Ray Protective Clothing
Learn how to properly clean and disinfect your radiation protective clothing to prevent infections of the patient, operator/user, or third parties.
read more

How To Buy An Apron – Important Factors in the Selection of an X-Ray Apron
Recommendations and advice for selecting your protective clothing in order to ensure a perfect balance of radiation protection, weight and comfort.
read more 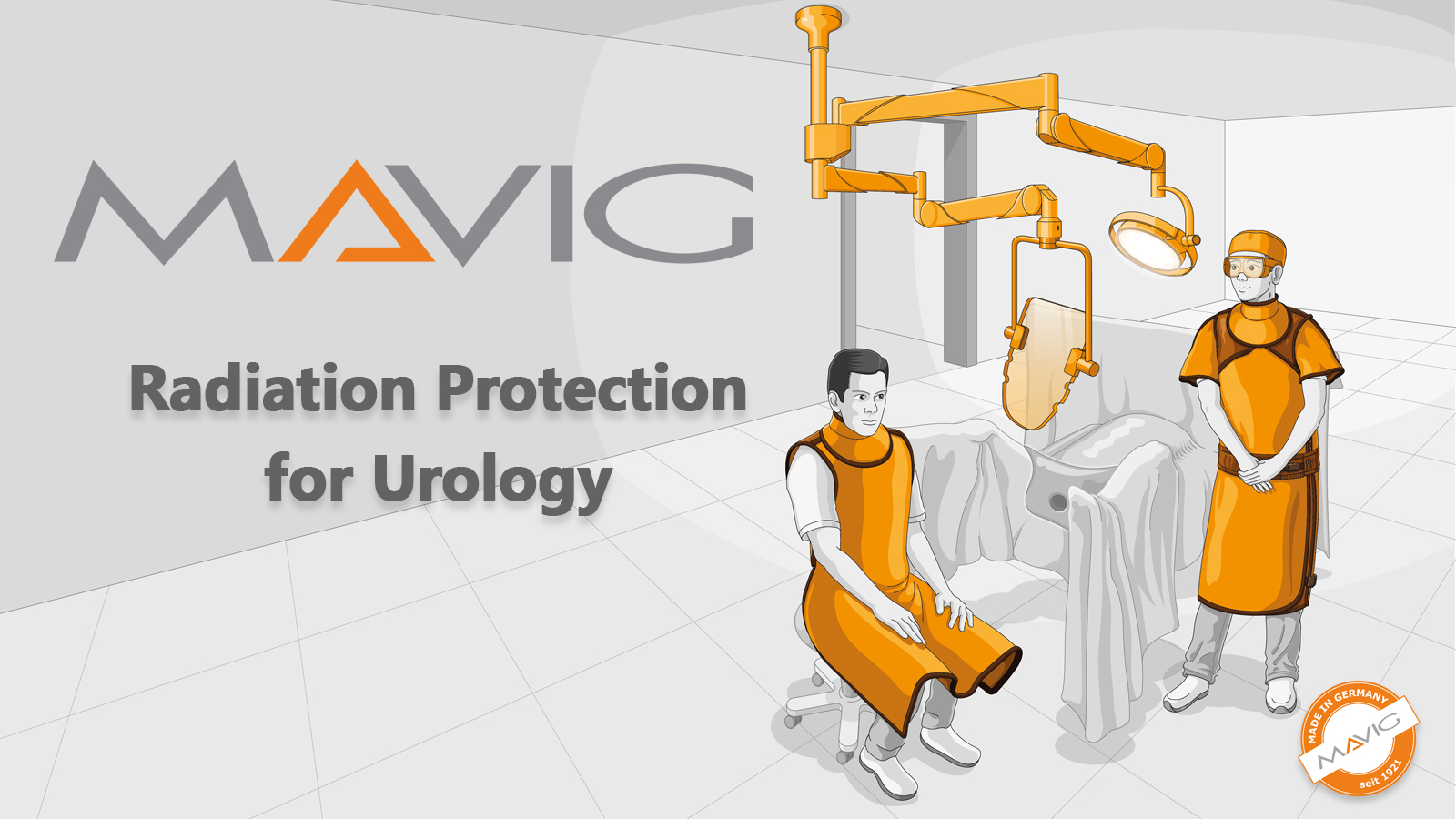